The Hermitage of Sant Antoni Abat is located in a medieval neighborhood in which the village dwelt in the muslim era.

Sant Antoni hermitage this is separated by the ravine that divided the town between moriscos or new christians and the old christians. Formerly, there was an arab mosque that was demolished during the War of Germania (1521). It was built again and dedicated to the christian cult, between 1530 and 1580. Between years 1936 and 1939 was demolished again, according to documents found in the archives. Its reconstruction dates from the end of 1940, rising on the land in which previously was the old building of the hermitage. The plant of the hermitage is of rectangular form, of 6.80 meters of main facade and 12.60 meters of depth; on the left side, has a square of 3.50 x 3.50 m, which corresponds to the sacristy.

The structure is composed of load walls and forged joists. The deck is flat, with a slight incline towards Sant Miquel street to evacuate the rainwater.

The main facade is a reconstruction of the primitive one, that falls in the square of Sant Antoni.

Inside the church, it has a false ceiling of plaster in the form of vault of cannon and some false arcs.

The finish is with a stucco imitating the marble. The pavement is of medium-grain terrazzo as are the steps of the altar. The access door is made of wood. 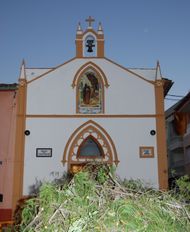 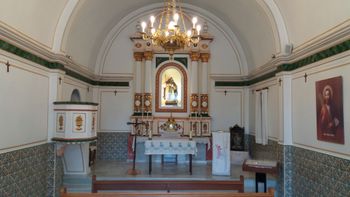